In the early 1990s my esteemed predecessor Kenneth Robson was contacted by Mr James Miskin, a member of the Flyfishers’ Club and an avid collector of angling memorabilia. Mr Miskin had recently purchased a watercolour painting of a pike-headed gavel identified in faded red ink as “The Chairman’s Hammer of the Amwell Magna Fishery Club” (sic) and was keen to examine the original which he assumed was in the Club’s possession.

The news that such an artefact might exist came as a complete surprise to Ken who in all his extensive researches into the Fishery’s archives had never come across any reference to such a thing. Mr Miskin kindly invited him to lunch at the Flyfishers to examine the painting and he was able to take several photographs of it. Incidentally it was Mr Miskin who soon after proposed Ken for membership of the Club. 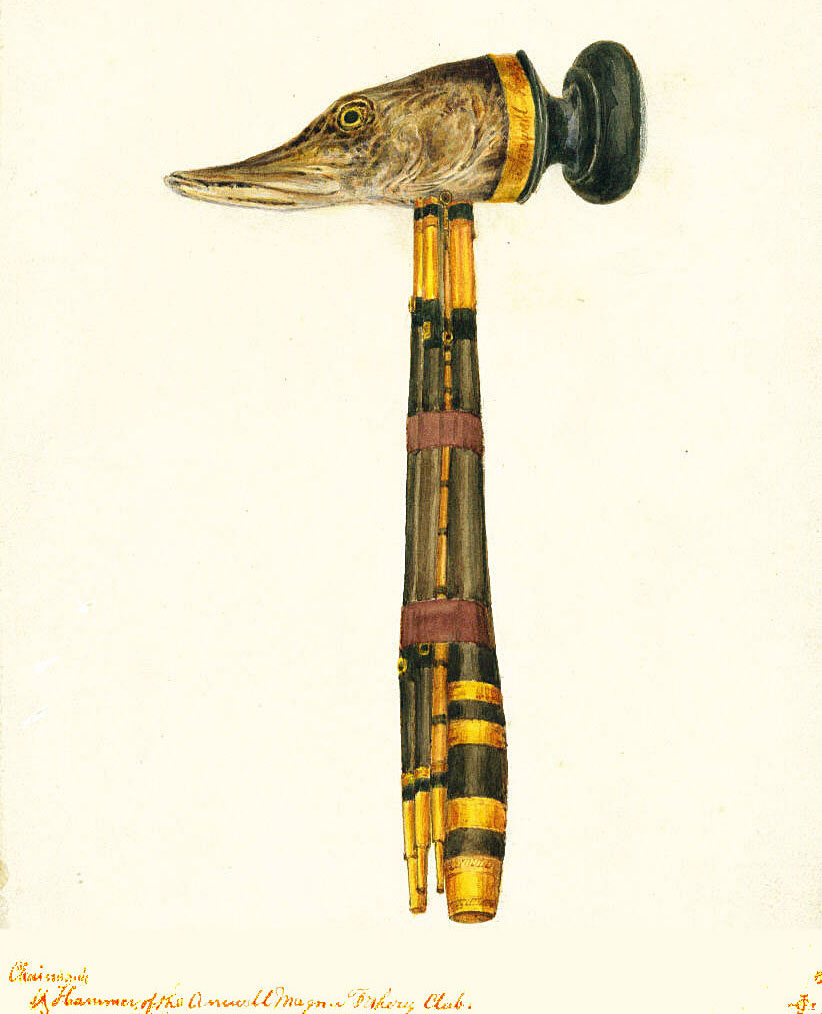 The Chairman’s Hammer became for Ken and indeed many members of the Fishery, me included, a sort of “Holy Grail”. We believed that it was out there somewhere and would, one day, turn up.

In 2003 James Miskin very kindly gave us the painting which now hangs in the Club Room at the Fishery. We had it mounted and framed and presented to Ken for safe keeping. However, a couple of years later he passed it on to me because Mrs Robson disliked it and found it oppressive.

I hung it at home and subsequently had plenty of time to study it in detail. Gradually I came to the conclusion that the Chairman’s Hammer might not actually exist and that the painting was an artist’s impression of what such a gavel might look like. My scepticism amused Ken greatly though he dismissed it as misguided, to the extent that he wrote an article in the Flyfishers’ Journal (of which he was then Editor) about our “dispute” which proved, at least to his satisfaction, that the hammer did exist.

The head of the “hammer” resembles so closely those of the pike-headed gavels of the Piscatorial Society as to be identical. But instead of a conventional handle the Amwell Magna’s version consists of a four piece greenheart fly rod bound together with what might be strips of copper or leather. From the painting it is impossible to see how the head is mounted onto this rather cumbersome handle, indeed the rod and the head do not seem to be connected at all. But it has been suggested, plausibly, that a metal rod could be screwed into the lignum vitae head of the gavel and that the fishing rod is strapped around this, obscuring it from view.

The hammer in the painting is, I think, pretty much full size, Overall length is 9 inches and the head measures 4.75 inches from the tip of the pike’s prognathous jaw to the slightly convex striking surface. The handle is 7.25 inches long. This makes the overall length of the rod about 28 inches.

Now I suppose it would have been possible to commission a rod maker to produce a model fly rod of those dimensions, perfect in every detail, to serve as the handle of a gavel. But the thing is, it doesn’t look like a tiny model. It looks like a full size fly rod of, say, 10 or 11 ft in length that the artist might have had hanging behind the back door ready for use and that he used as a model for his painting. That handle just doesn’t ring true for me though it’s an ingenious idea for an artist’s impression.

Another thing that doesn’t ring true is the handwritten caption beneath the picture. Originally written as “The Hammer of the Amwell Magna Fishery Club” the “Chairman’s” has been inserted subsequently and as for “Fishery Club” that is simply not a usage that anyone closely associated with the Fishery would countenance. The artist is unknown, identified only by a monogram on the lower right of the picture composed of the two letters F and C. Who FC (or indeed CF) might be, remains to be discovered.

And why is there no mention of the Hammer in the Club’s records? We know that Perry Duprey and his successors up until 1914 kept meticulous records including minutes of AGMs which are still in the Fishery’s possession, but there is no reference anywhere to the Chairman’s hammer, though one would have expected it to have been ceremonially produced for the duly elected chairman of the day to use. It would have been an important artefact and surely worthy of at least passing mention.

No, I don’t think it exists. I think the painting is all there is, or ever has been. But I could be wrong. Out there somewhere in the cobwebbed, dusty recesses of a back street antiques shop, in someone’s attic, in the back of a cupboard or in a prized collection of angling arcana it is waiting to be identified. The Amwell Magna Fishery’s very own “Holy Grail”.

We would dearly love to be reunited with this item. Do you know where it is now? If so please contact us.