If pressed, most of us would, I think, admit to the belief that our little fishery is a rather special place. But those at the coal face tend to find that familiarity breeds an inability to see the wood for the trees…

I was prompted in this somewhat metaphorically-mixed cogitation by an email from a former member who recently visited the Club for the first time in over 20 years.

Anthony Peters had been a member in the 1970s and 80s. He served on the Committee and was the Club’s Treasurer when he resigned his membership in the early 1990s. He contacted the website after reading the item about the missing memorandum books, as he had found among his papers an account book of the club’s covering the period 1966 to 1982 and wished to return it.

Feargal, as our archivist, contacted him and arranged for him to visit the Fishery to hand over the documents and also to enjoy a morning’s fishing if he so wished. Anthony duly came and after handing over the archival material and admiring our new club room spent a few hours fishing and caught a brown trout of nearly four pounds – a fish which, as he said, would have been unimaginable in the days when he was a member. Shortly after he wrote to say:

I did enjoy the Saturday with you very much indeed and remain astonished at what has been achieved and is being achieved in the 20-odd years since my departure. The whole area has become a hidden paradise.

Taking Tenkara to the Edge!

Last month, one of my guests, Steve Edge, turned up bearing not only the usual load of conventional tackle but a slim fabric bag about 15inches long that held a Tenkara rod that he’d been given for his birthday. He wondered whether he might just try it out.

Though I had read several articles about this traditional Japanese method of fly-fishing which is becoming increasingly popular in the West, I thought it might be interesting to see it in action and soon the contents of the bag had been telescoped out to form a limber 11ft rod, to the tip of which was attached a light braided line of about the same length. To this Steve looped about 5ft of tippet and tied on a size 14 Klinkhamer. 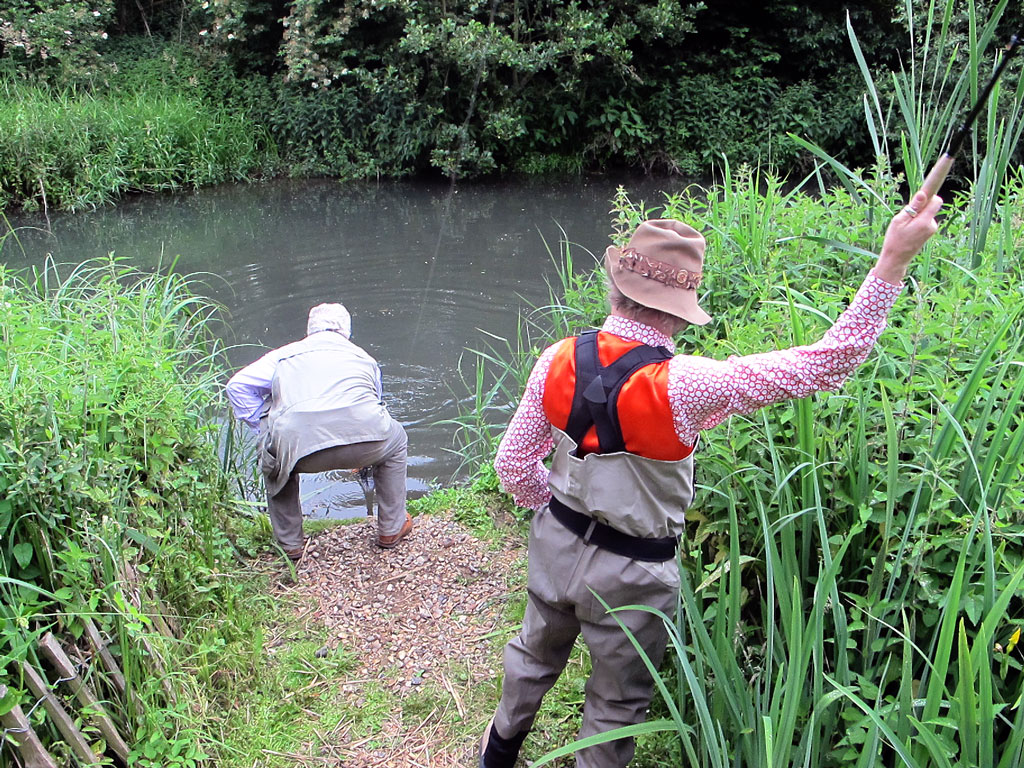 After a few trial casts when the fly seemed irresistibly attracted to the bankside vegetation he succeeded in covering a nice brown which had risen a couple of times outside the hut while he was setting up. The take was immediate and the fight was on. It soon became clear that the lack of a reel and running line was easily made up for by the flex and spring of the Tenkara rod and within a relatively short time the fish, more confused than exhausted, was ready to be landed. 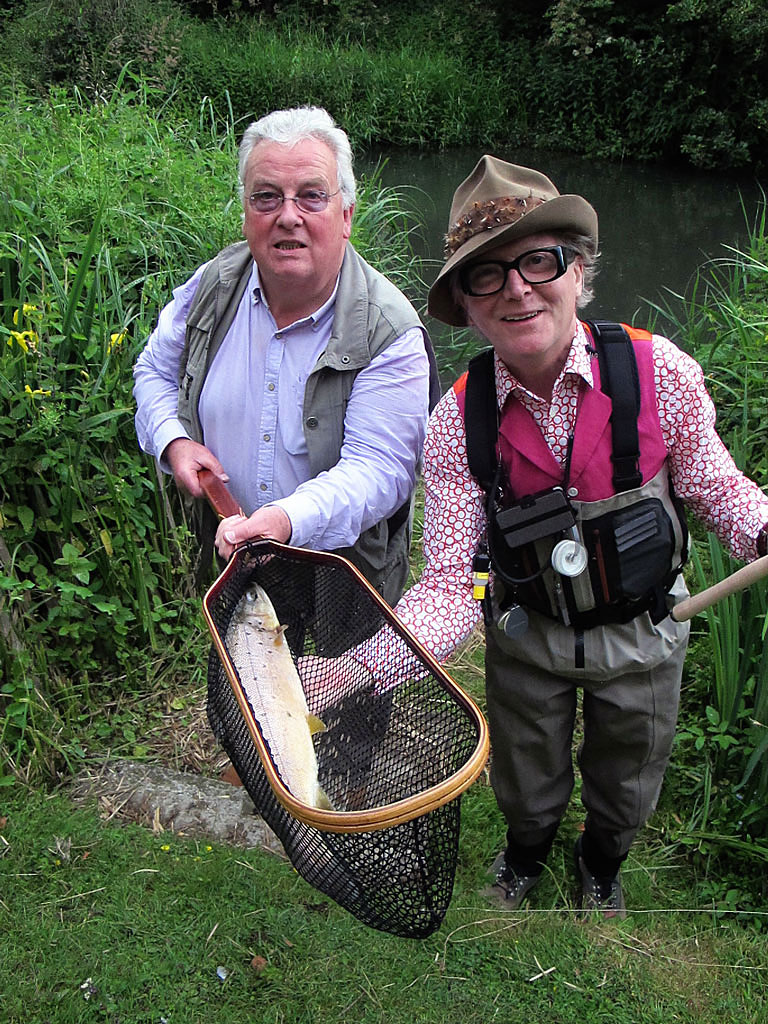 The intrepid Piscators looking relieved that it’s all over

And here we come to the reason why I won’t be seen at Amwell Magna waving my own Tenkara rod about (not, I hasten to add, that I have one). Quite simply, the combined length of rod and line means that to land a fish of any size you either need three hands, a net with a 15ft handle, or a ghillie.

With the small trout of mountain streams that the technique was developed for, the angler brings the fish to hand by hand-lining it. This is not however feasible with a lively 4lb brown. So while Steve retreated to the back end of the platform I slipped the net under the fish.

I reflected that in all its essentials this was the way that Izaak Walton would have fished, though a rod of ash, sycamore and hazel would have been slightly more cumbersome than carbon fibre. And really harking back to Walton I’ve read somewhere that the modern Tenkara purist can now buy horsehair lines!

One that got away?

The other day I was browsing in Chalkstream  – that delightful anthology compiled and edited by Charles Rangeley-Wilson – and came across The Field’s report of the 18lb brown trout caught in the New River at Haringey on 28 August 1907. The Field’s reporter had gone to see the great fish at the shop of the taxidermist who was to set it up, Mr J Gillett of 40 Fetter Lane. But what caught my eye was the following:

“The heaviest trout that Mr Gillett had previously had through his hands was a 16 pounder taken from the Lea at Amwell Magna more than 20 years ago.” This would imply that it was caught in the 1880s but it shows up nowhere in the club’s records. It would eclipse Arthur Cousens’ twelve and three-quarter pound fish caught in July 1885 at the White House, New River and is double the Lea record of 8lb caught from the Overshott in 1882 by John Schott Cousens. So who caught it, where and when? Is it still out there somewhere in its glass case? I wonder.

Meanwhile, back to the present. To the end of July members have fished on 155 occasions and caught 339 fish (169 browns and 170 rainbows). Guests have accounted for another 59 giving an underwhelming total for the season so far of 388 fish.

It has to be said that conditions have been far from perfect and this is reflected in fishing effort. In May members fished on 59 occasions and a creditable return of 57 browns and 86 rainbows was logged. But June saw only 38 visits for a return of 43 browns and 35 rainbows and in July the fishing effort dropped to 22 rod days and only 26 browns and 9 rainbows were recorded. We must try harder!

But not all is doom and gloom. The increasing number of small home-grown brown trout showing and being caught this season is an exciting trend. Inter alia Robin Guild has logged a three-quarter pound fish; Bob Dear has had four in the 9 to 13 inch range; Colin Barbour two of 9 and 10 inches; Steve Garbutt one of 8 inches; Trevor Fagg a 6 inch fish and yours truly one of 8 inches.